Soils: A Priority for Africa's Agriculture

Agricultural productivity including livestock production is under threat in Africa because of continuing decline in soil quality.

In Sub-Saharan Africa, 65 percent of arable land suffers from soil degradation due to erosion-induced losses of topsoil and soil nutrients. Restoring and rehabilitating the health of soil in Africa is a viable intervention towards promoting food security in the region.

Despite Africa’s vast land resources, less than half of it is currently utilized for agriculture with only 16 percent of the arable land considered as high quality.

The extent of soil degradation in Africa is not well documented nor understood due to lack of soil data systems, the constantly evolving ecosystem, climate change and diverse needs of agriculture.

A Soils Initiative for Africa

It is with this background, that ASARECA in partnership with The Chicago Council on Global Affairs, Catholic Relief Service, Colorado State University hosted a pre-event during the just concluded AGRF 2020 Virtual Summit dubbed A Soils Initiative for Africa. Other partners included, AFAAS, CCARDESA, CORAF, FARA and RUFORUM.

The side event brought together over 100 agriculture and soil experts and facilitated a dialogue to understand the extent of soil degradation, the opportunities and challenges that exist in enabling a favorable environment for the restoration and rehabilitation of soil in Africa for improved productivity.

“Healthy soils are fundamental to crop and pastoral production in the region. Research and innovation have provided solutions that through collaborated partnerships can be scaled out to smallholder farmers, who need them the most,” said ASARECA Executive Director, Prof Jean Jacques Muhinda Mbonigaba as he moderated the session.

For several decades, agriculturalists have noted a long and steady decline in soil health that continues to diminish food productivity in Africa. Whereas numerous efforts have been put in place to increase productivity, the vision of attaining food and nutrition security and poverty reduction may not be achieved if more attention is not put into improving soil health.

The economic cost of land degradation is estimated at US$65 billion per year.

“The constraints on agricultural productivity posed by poor soil health reduce the growth of the agricultural sector and gross domestic product (GDP). Recent estimates suggest that the impact of diminished soil fertility on Africa’s crop and livestock operations alone have a cumulative annual cost of over half a percent of Africa’s overall GDP”, said David Nelson on the consequences of soil degradation in Africa.

As highlighted in his recent paper : Considering A Soils Initiative for Africa , Mr Nielsen notes that “beyond these direct costs to the farming sector and to the overall economy, degraded soil health threatens food and nutrition security. It reduces the soil’s ability to filter contaminants out of water supplies, capture water on water-scarce lands, and capture carbon (thus exacerbating climate change). It also makes soil more vulnerable to erosion and mineral leaching and escape and thus more vulnerable to the effects of climate change.”

With the growing population expected to surpass 9 billion people by 2050, there has been an increasing demand for both processed and fresh foods. This has ultimately led to an increased land utilization including deforestation.

“If a farmer cuts down a forest and plants maize, it is considered land degradation because the value of forest is higher than maize,” remarked Dr. Ephraim Nkonya from IFPRI.

The cost of changing land cover accounts for 95 percent of land degradation, in addition to other uninformed farmer practices like overgrazing and not using adequate fertilizers. 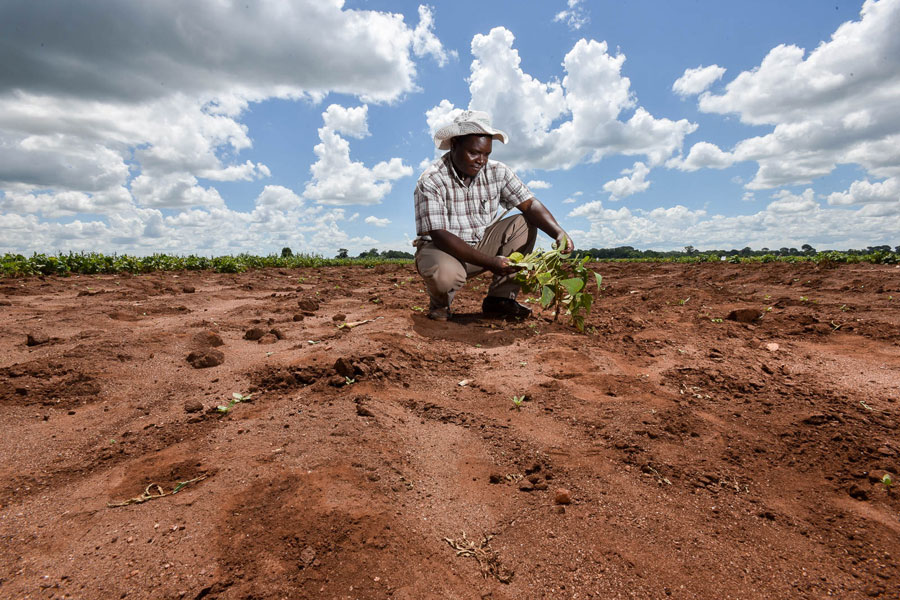 Despite farmers awareness of this soil decline, majority of them lack access to farm inputs like fertilizers, finance and knowledge on how to restore and rehabilitate their soils. Market failures stirred by non-existing or non-inclusive policies also hinder farmers’ response to this devastating soil challenge.

Research has proven that the returns of land restoration is high; for each dollar invested there is a 5 dollar return on investment. So why are we not investing in land restoration?

As climate change continues to pose a serious threat to agricultural productivity, soil health is prudent for our survival; soils can help us mitigate and adapt.

“Over 50 percent of the top soil has been lost due to erosion over the past 50 years.Soils are the biological buffer between how we live. The soils need to be performing optimally for our survival,” added Dr. Gene Kelly from Colorado State University.

Improving the health and productivity of soils in Africa will involve intensive knowledge and information sharing on soil resilience. Unfortunately, so far, smallholder farmers only rely on traditional, sometimes erroneous knowledge about soil management.

“Technology is now available to evaluate soil systems, nutrients, water holding capacity and much more. Decisions on soil use should be made looking at resiliency of soils based on this reliable information, “said Dr Liesl Wiesl from the University of StellenBosch.

Noting that soil health is a cross-sectoral issue, it is prudent to have all the stakeholders engaged for an operational implementation of soil health programs.

“We should focus more on the farmers and providing direct access to them. Turning farmers into extension officers, will provide the link between knowledge and more smallholder farmers,” added Dr. Wiesl.

Collaborative co-creation of effectives strategies, innovations and technologies, through participatory engagement of diverse stakeholders including government, private sector, research/training institutions, NGOs, development partners and farmers, was also discussed as an opportunity to set a platform for responsive interventions based on the needs of the farmers. Soil restoration has no one-size-fits-all solution.

There is an urgent need to map soils to understand the state of degradation across Africa, understand the type and depth of current interventions, the types and approaches to the delivery of advisory services and political economy. Coordination and alignment are urgently needed to better organize and deploy resources efficiently through existing institutions and networks.

As highlighted by USAID’s Dr. Jerry Glover, “Resilience starts with soil. Soil is the foundation for food security,” urgent collaborative interventions are needed to safeguard smallholder production, which accounts for over 60 percent of food produced in the continent.

Africa’s soil health is in a dire state and urgently requires a trend’s reversal. Soil health is at the centre of food and water security, rural livelihoods and environmental sustainability.

Reversing soil degradation requires building the capacity of soil sciences professionals and equipping smallholder farmers with the right information at the right time.

The following were key call to action points as raised by the head of the agriculture and food security division at the commission of the African Union, Dr. Simplice Nouala Fonkou.